Near-infrared fluorescence imaging with Indocyanine green for diagnosis in urology. Our first experience 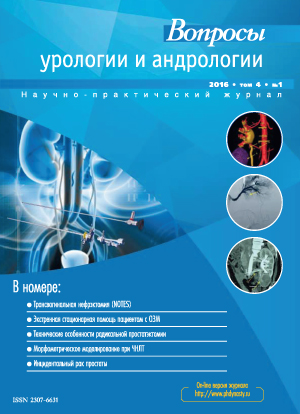 The objective. To assess the first experience of using a SPY system in the Urology Clinic of I.M.Sechenov First Medical University (optimization of the concentration and volume of injected ICG solution, choice of a way of injection, determination of the optimal transit and examination time, specificities of the course of operation from the viewpoint of using SPY).

Patients and methods. The pilot study of diagnosing with the use of the SPY system was performed in the Urology Clinic of I.M.Sechenov First Medical University. It included 10 patients: 4 underwent retropubic radical prostatectomy with lymph node dissection, 5 – kidney resection, 1 – ureteroplasty. In prostatectomy, the fluorescent dye was introduced transrectally under transrectal ultrasound control, the state of the lymph nodes was evaluated. In kidney resection, the dye was injected intravenously to differentiate tumour from parenchyma by its blood supply. In ureteroplasty, Indocyanine solution was introduced into the pelvis to contrast the ureter and to reveal localization of the stricture.

Results. In all observations with RPE, according to planned histological examination surgical margin was negative. The median number of lymph nodes removed per patient was 15. Of them metastases were confirmed in 2 lymph nodes. 27% of the total number of removed lymph nodes were fluorescent during examination. The sensitivity of the method for visualization of «signal» lymph nodes was 100%, specificity – 73.3%. In kidney resection all masses were malignant and hypofluorescent as compared to parenchyma, with clear margin. Distinctly visible fluorescence was observed on the average 40-50 seconds after injection of the dye and persisted for the minimum of 5 min (then blood flow was blocked and resection performed). In ureteroplasty, SPY permitted to determine localization and length of the stricture. No allergic reactions or complication of the dye injection occurred.

Conclusion. Our experience shows that diagnosis with ICG improves the quality of surgical interventions due to higher radicality and lower invasiveness. The method is convenient to use and safe, does not require prolonged training. Its wider introduction necessitates more independent multi-centre studies with a long-term observation period.