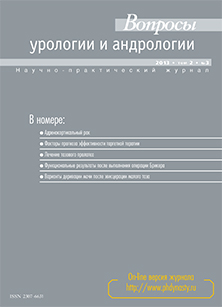 The  objective.  Evaluation  of  the  possibilities  of  x-ray  computed  tomography  (CT)  combined  with  single  photon  emission computed tomography (SPECT-CT) in finding a cause of pathological accumulation of a radiopharmaceutical (RP) in a solitary spot according to the findings of planar osteoscintigraphy in oncologic patients. Patients and methods. The study included 56 patients (25 males, 31 females, average age 55.5 ± 2.5 years) with diagnosed oncologic disease (cancer of mammary gland – 58%, prostate cancer – 39%, kidney cancer – 3%), in whom, according to the findings of planar osteoscintigraphy performed to find secondary changes in the bone system, solitary spots of pathological RP accumulation were found (in vertebrae in 58% of patients, in ribs – in 33%, in pelvic bones – in 9%). All patients underwent hybrid SPECT-CT imaging in the area of the spot. Results. The results of the present work have demonstrated a high specificity of CT imaging in detection of benign changes in  bone  tissue  in  the  projection  of  a  solitary  RP  accumulation  spot  –fractures  and  degenerative-dystrophic  changes  were found on the whole in 36% of patients. In finding additional spots of enhanced RP accumulation according to SPECT (14%), bone lesion was assessed as multiple, therefore, metastatic- the results of hybrid SPECT-CT imaging did not influence the final  conclusion.  In  31%  of  cases,  SPECT-CT  findings  confirmed  solitary  lesion  in  bone  structures  with  the  signs  of  the metastatic character of changes obtained by CT. In 19% of cases, changes in the bone tissue were absent in the projection of  a  RP  hyperfixation  spot  according  to  CT.  Despite  this,  specialists  assessed  these  spots  as  metastatic,  which  was confirmed by the disappearance or decrease of the intensity of the enhanced RP accumulation spot under the influence of local  or  systemic  treatment  with  dynamic  observation.  The  average  size  of  spots  was  1.71  ±  0.21  cm.  Sensitivity  and specificity  for  the  SPECT  component  was  91  and  31%,  respectively-  sensitivity  and  specificity  for  the  CT  component  – 52 and 92%. On the whole, hybrid SPECT-CT imaging of solitary RP accumulation spots in the bone system demonstrated the accuracy of 92%, sensitivity – 91%, specificity – 92%. Conclusion. The optimal use of SPECT-CT in the area of a solitary RP accumulation spot enhances the possibilities of planar osteoscintigraphy to detect additional spots of pathological RP accumulation and permits to precisely determine their localization and nature.