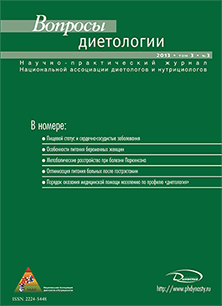 The objective. Assessment of the influence of prebiotic correction of gut microbiota on the vitamin-mineral status of professional athletes who take high doses of vitamin-mineral complexes (VMC).

Patients and methods. Dynamic examination included 14 elite-level athletes from men’s first team of a professional basketball league aged 21–34 years. During the first season 2007/2008 (6 months) the players received high doses of VMC, during the second season 2008/2009 (6 months) a prebiotic complex Eubicor was additionally used in a recommended dosage. In all participants, detection of 20 trace elements in hair, examination of group В vitamin levels in blood, and also bacteriological assessment of gut microbiota were performed.

Conclusion. Enrichment of the diet of basketball players with prebiotic fibers in the second season permitted not only to avoid the first-season’s negative tendency to formation of mineral imbalances and subnormal provision with group B vitamins, but also, due to optimization of qualitative, quantitative and, probably, functional characteristics of gut microbiota, to enhance a positive effect of VMC intake on the vitamin-mineral status of professional athletes.