Relapse of adenomyosis after myometrectomy at the big sizes of uterus 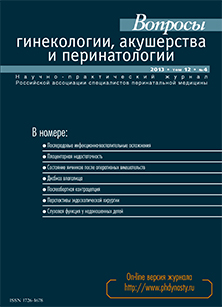 Clinical case of adenomyosis in large sizes of the uterus after previous myometrectomy in 2006. Later 8 years, despite conservative therapy, the disease clinic has renewed, the sizes of a uterus were enlarged till 17–18 weeks of pregnancy.

Conclusion. In the literature the important question is discussed: whether adenomyosis is a component of genital endometriosis or is independent disease? Today the answer to this question does not exist, and the problem is opened for discussions. However, it is convincingly proved that pathogenetically, morphologically and clinically adenomyosis is not similar at all to endometriosis (external). In the foci of adenomyosis the stromal component always prevails over a glandular epithelium; thus the epithelium is characterised by low receptor activity, and in it there are no secretory transformations as the glandular epithelium of adenomyosis develops from basal membrane. The correlation of stromal and glandular components in heterotopias of external endometriosis is variable, and an epithelium is characterized by high hormonal sensitivity.

The presented clinical case convinces once again that adenomyosis is hardly treated with conservative therapy, which at the given disease can be characterized as ineffective. In that observations, when there is morphological adenomyosis (instead of excessive and often unreasonable hyperdiagnostics of ultrasonic diagnostics), for pathogenetic treatment of such patients is required a surgical intervention. The kind and volume of the last is defined by a concrete clinical situation and possibilities of the surgeon (a surgical hospital).